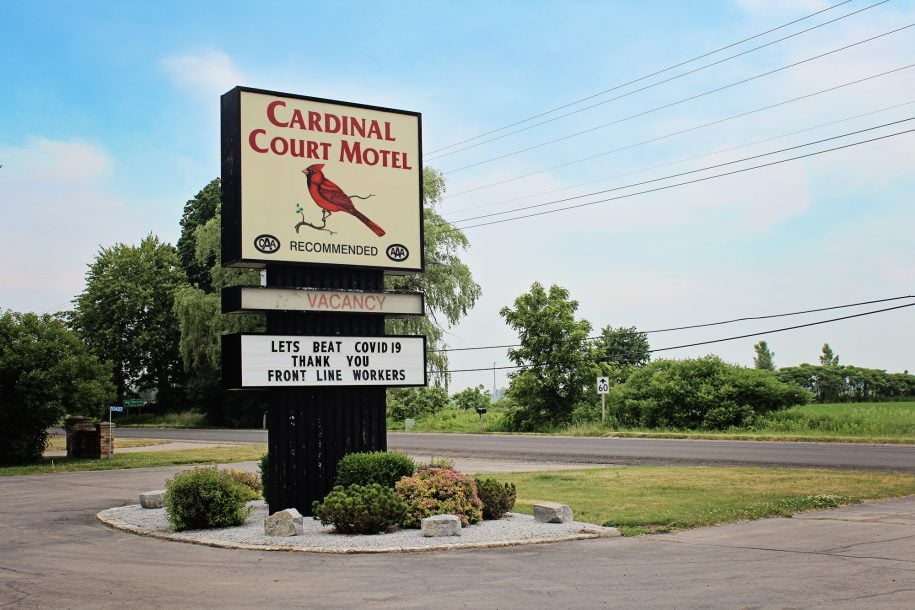 Posted by CardinalCourt on March 9, 2020 | Featured

After a visit by a guest who was also a reporter, in the spring of 1999 The Cardinal Court Motel was featured in this newspaper article.

Dateline: St. Thomas, Ontario — The Cardinal Court was the first hotel, motel, bed and breakfast, hostel, or room for rent that we had seen in the last 100 kilometers or so on Ontario Route 3, which parallels the northern shore of Lake Erie between Windsor and Niagara, Canada. I was not picky at this point in time, especially since radio coverage of the U.S. Open Golf Tournament does not quite “get it”. Not only did the Cardinal Court let me see Payne Stewart’s final scrambling par which won the Championship, and a replay of the John Daly fiasco, it reminded me again why one should occasionally travel two-lane highways rather than the quicker expressways.

If you can find the time to get off the four laner and take “the less travelled path” in southern Ontario, you will hopefully find the same hospitality we did.

The Cardinal Court, located just west of St. Thomas, is owned and operated by Ann and Ted Henderson, a British couple who provided us with homemade strawberry and rhubarb muffins for breakfast and truly did treat us like guests. We later were to pay three times as much at Canada’s largest hotel in downtown Toronto, but get less than a third of the individual service. We asked the Hendersons and other locals for dining suggestions, and found truly extraordinary food and old world courtesy that I could neither afford nor find in the lower 48 states.